The Beast is in the Stream

People have been asking us for ages how to see The Beast of Bottomless Lake on line.  We haven't had an answer for them - let alone a good one... but that is in part because we hadn't settled upon one. We did explore a number of options. The ones we were most interested in had too high a bar of entry - either requiring a significant investment we didn't really expect to get back, or having gate-keepers who could not be dashed-past (it rhymes with "pet-chicks"). When we took a step back and asked ourselves what our main goal was, the answer was "for people to see the film easily."  Once that was clear, our top option became pretty clear... the number one free video platform on the internet - YouTube. 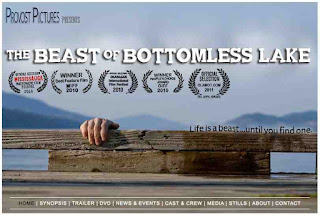 So, here it is - THE BEAST OF BOTTOMLESS LAKE is AVAILABLE to VIEW on YOUTUBE for free.

But wait! There is more!

Not only is the movie available on YouTube on a dedicated channel, but so are every single feature from the DVD. ALL the commentaries. ALL the deleted and extended scenes. ALL the featurettes. As well as a few specially created playlists for watching all of the latter two groups of videos together in one sequence, and (yeah, more) a playlist which includes every video about The Beast of Bottomless Lake from the main Provost Pictures channel, as well as a few that we found on various other channels - news items and interviews mostly in that latter designation.

So, if there is anyone you've really wanted to tell about The Beast, or whom you wanted to see it, it has never been easier.  Just send them the link.

Obviously the posts about The Beast of Bottomless Lake are getting fewer and farther between, and truth be told, after this announcement, there isn't likely to be much more to shout from the rooftops...
HOWEVER...!
In the process of preparing to put the Beast on YouTube we came across a bunch of amusing material that has never been seen - at least not clearly.  Behind the scenes photos.  Text from various printed props. That kind of thing.

There will be a few posts of some of these gems over the next while before we officially sign off from this blog (until such time as there is something unexpected to report upon.)