I really intended to post something before this past weekend, but circumstances had other plans for me. Just your run of the mill 'not enough hours in the day' stuff. 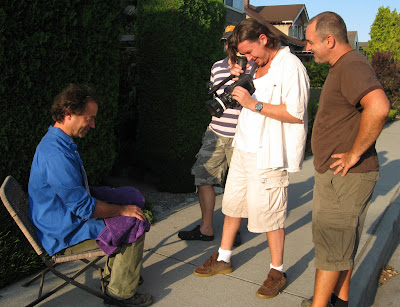 For the most part it was fun and at a relatively relaxed pace. Though the last day didn't quite work out as planned, but I'll get to that.

Friday we had a late morning start and spent a lot of the day at the park & beach picking up a handful of small shots that we've discovered in editing that would highly benefit the story telling within the film.

In the afternoon we moved over to Craig's apartment. The timing was less than ideal in that we were a dozen or so people crammed into a one bedroom apartment at the hottest time of the hottest day of summer so far (a record breaker, in fact) and we had a couple of 1K lights shining down upon us.
We got some coverage of Leanne and I for two differnt scenes, and then added some additional inserts and pyrotechnics that we'd been unable to shoot last spring.
The pyro was amusing. I had consulted David Barkes last year on the matter, and combined with some previous theatrical application, we'd decided to use flash paper in a metallic garbage can. There was a lot of paranoia about the effect, though I was confident - I'd used flash paper in my bare hand on stage, I knew it was as safe as could be expected. Nonetheless it was prudent to be extra prepared with extinguishers and other devices intended to contain the fire should everything go wrong. After all that prep, the initial problem was quite the opposite. Due mostly to technique the paper didn't catch fire - the matches were out by the time they got to the paper. When that issue was worked out, the first actual working shot was spectacular and got great oohs and ahhs from everyone. The flame had actually gone so high that it was a bad shot, so we had to do it a few more times. The last attempt - where we used some extra paper for longer burning time and shot it at high speed (for slow motion) - was truly spectacular. I did a dance of joy.
Burning things... fun.

We ended the day with shooting a scene we'd originally decided to cut.
Those of you familiar with Moby Dick will be aware of the chapters that I refer to as the 'documentary' chapters. They don't technically advance the narrative, but they do add something to the book. Chapters on the nature of the colour white, the variety of whales, the use and creation of marine rope... there are dozens of these chapters covering a huge range of topics.

To the best of my knowledge, no other work based on Moby Dick has ever tried to include this aspect of the book - which is one of it's more fascinating features. Granted, it's not such an easy task. The structure of our film allows us a unique opportunity to include an equivalent - documentary interview moments with fictional Ogopogo experts, who each provide a small tidbit of information or thematic layering to the whole. We cut the 'Sheriff Snider' interview during principle photography last year because of scheduling issues. But in editing we've discovered that we don't really have enough experts to sell the trope. So we added 'Sheriff Snider' back in. We also added a brand new expert to be shot first thing the next day... 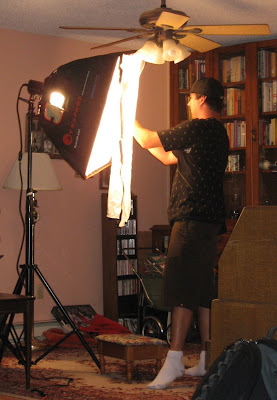 Saturday began in the afternoon. In my Mother's living room, filming one of our favourite actors, Mary Black, who we've been trying to get into the film for ages, but it has just never quite worked. Mary was very funny, and she nailed her brief 'expert' monologue in no time. 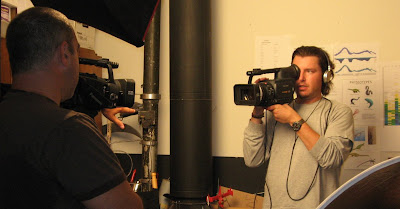 From there we went to our editor's office to shoot a few inserts to existing scenes against his handy wall. David Nykl and I got to revisit our only two hander scene, though only for a very brief moment. Ironically the scene is dominated by a torrent of verbal effluvia from David, while I say almost nothing... but guess which character's arc is being improved by the new version? You guessed it, mine. 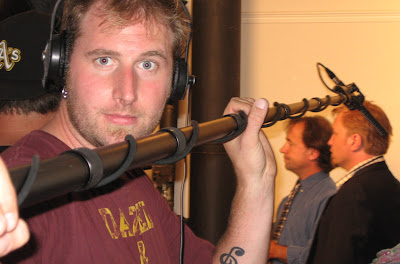 Back to Craig's for dinner and to wait for nightfall, as the rest of what we had scheduled was all to be shot in the dark. Dinner - put together largely by Elaine, Craig's wife, was as good as we had anytime on set - and we had a number of fantastic meals served up by Garner and Janet in the Okanagan or by Jill and Scott at the postal plant. We also got to show those who were present a small portion of what has been edited thus far. It was an unintended side effect, but everyone was pleased by what they saw and the already good mood was raised to genuinely high-spirits. 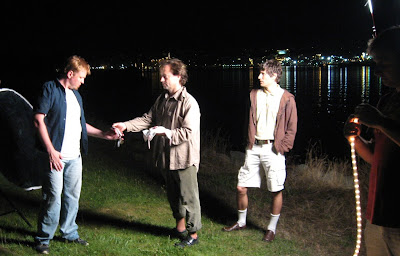 The evening was a mix of inserts of various props doing various necessary things as well as getting additional detail of both David on his own and Roger and I together for the 'wedding scene' so that we can better refine and pace the gags.

Saturday was a little extra fun for me as Jodie (my girlfriend) was able to join us on set and help out. She'd never been on set before so it was a novelty for her. She took all the pictures we have included. 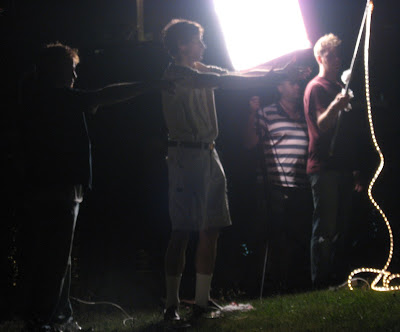 Sunday morning we were back at the home of Brian Sizer, for the most part to get additional footage of Roger and I interacting again - this time for the 'going to bed' sequence, which is already fairly amusing, but with better coverage and more precise performances should play much better on screen.

The shoot up to this point had gone quite well. But it would stumble a bit in the next few hours. We were longer than expected at the Sizer house, and there were a small number of miscommunications in getting to our next location. The sunny day had brought far more people than anticipated to the location and parking became a nightmare. Noise was too much for the dialogue we needed to record, and as if that weren't enough... the sun which had been oppressive for two days began to disappear as we were approaching the last two scenes we truly needed it for. Argh!

We bailed on that location and went to our next one, crossing our fingers that we'd have a chance later in the day to finish up. Suffice to say that the weather didn't do what we needed it to do. We DID get what was intended to be the last scene on the schedule - which didn't need the sun - but we didn't get those last two scenes. Mark Redsky had come out to set and never got used. I hated having to do that to him, but he was good natured about it.

We finished up the weekend with pizza and beer back at my place. It had not been the plan to finish there. We'd hoped to be in the park! But that same damned weather ruined that plan at the last moment too. We watched the rain from my balcony, knowing we'd have to all reconvene yet again, but the mood was positive.

Everyone had seen a good chunk of the film in it's current state and could appreciate how the good work we'd done in these last three days would improve it manifold. 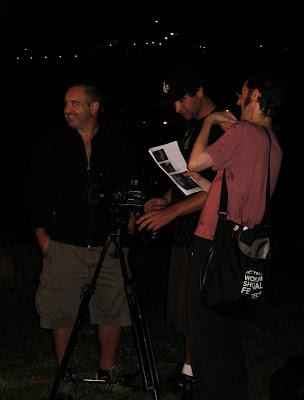 We're hoping to shoot those last bits next weekend - or as soon as possible thereafter. But Craig is going in for surgery next week and he's going to be largely unavailable as a director for a bit. We'll pretty much have to temporarily forge on without him. Sooner the better to finish up is the philosophy. The needs of the remaining footage to be shot is fairly self-evident and we already have the template of the existing footage to go by.

Thanks for the update! Looking forward to seeing the movie when it finally comes out!

Cool on your website update. Can't wait to see this flick. I'll try to remember to ask David when I see him in NJ this week !