Blog Posts as Elusive as the Lake Monster Itself 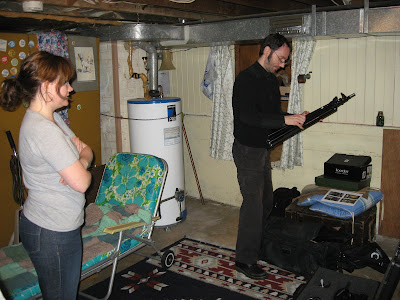 Well, this is a pain. The same thing happened with my personal blog too a month or so ago – where I thought I had posted something, but in the end it was nowhere to be seen.

The insider punch-line to that is that the post itself was primarily an effort on my part to catch up on reporting a week's worth of developments which I had meant to be blogging on as each came up, but life had interfered to the point where the developing story had kind of merged into one.

So, here is a rough reconstruction of the bottom line:

The picture is locked. The last ten days or so before lock were a flurry of test screenings as we tinkered with the end of the film in fairly radical ways. Each of those screenings was useful and provided good perspective, though the individual receptions ran the gamut.

The first provided the greatest amount of useful input which we based the majority of our changes upon, and which began the process of retooling the end of the film. Basically we realized that we were giving the audience a lot of redundant information. We thought we were reinforcing what the audience was assuming about character arcs – and we were close; the audience was making assumptions, the assumptions we wanted them to make, but by confirming those assumptions it was coming across as pandering and repetitive. That was a pretty cool realization. It allowed us to eliminate a few scenes and challenged us to find a new way to end the film in a satisfying way that wasn't the denoument we had crafted specifically to wrap the film up in a neat little package.

A small detour here – I am continually amazed at the power of context in an Eisensteinian sense. I could cite numerous tedious examples which came up in the process of editing Beast of Bottomless Lake but one stands above the rest for me. In the middle of the film there was a sequence where Paul, the team leader attempts to make an inspirational speech to the expedition team just before they set out on the water. He isn't very effective and it is interrupted by the appearance of his addled father on the dock. Paul goes and deals with his father. As he leaves the boat he asks the boat captain to build some camaraderie and do some team building. Paul goes and deals with his father while the team prepares the boat to set sail under a call and response sequence from the captain. The sequence had a nice rhythm that ended comically first with the team nay-sayer declaring "This is fucking stupid" before being reprimanded by the captain; seeing the boat is on the verge of leaving Paul overreacts and rushes down the wharf, leaving his dejected father on the dock; finally the comic character casts off – in a nice piece of physical comedy barely avoiding going into the lake before the scene shifts to the boat out on the lake in an up tempo scene of the team getting ready as the boat motors along to pulsing music. First we cut Paul's conversation with the captain – where he asks him to build team work for him. It simply seemed unnecessary. But it made a big change to the meaning of the nay-sayer's "This is fucking stupid" line. All of a sudden the character wasn't talking about the team building exercise, he was talking about the entire expedition, and that made him a bit too cranky. That would have needed dealing with, except we ended up making an additional cut – the entirety of the ream-building/casting-off sequence. The final version goes directly from Paul's father sitting dejectedly on the dock to the driving pulse of the boat cutting through the water; a transition which is actually a really effective shift of tone and pace. I'll mourn the loss of the comic character scrambling to get on board – there is one really good laugh in there, but that is the nature of film-making – you have to do some baby-killing.

The second screening put our solution to the test. We had made some more internal cuts where we felt the film had drifted, like in my example above. The screening was pretty remarkable. The response was overwhelmingly positive – to the point where I couldn't contain myself. Mid way through the film after a particularly boisterous series of peals of laughter I declared "You guys are hysterical!" We have to believe for our own sanity that the response was a bit of a false positive, but at the same time it gave us a level of confidence in the product that was definitely necessary at that point.

Concurrent to the second screening we had sent the film to some friends who we expected to be critical. It would be an understatement to say that we were surprised by how critical they were. Though that said it was also clear that they were watching the film under adverse conditions. Lots of starting and stopping (not so good for comedy) and they came into it having been told a previous and by then significantly inflated running time which by all accounts was too long. Their criticism definitely gave us some good food for thought that rang true, but much of it seemed to come from a perspective that was entirely un-useful to the film that we were making, falling into either the "this is the film I would make" category or a range where we simply didn't have the coverage even if we did see virtue in their suggestions.

With the second screening giving us a boost in our confidence we were empowered to make a final few changes and.... ULP!.... WALK AWAY. Yes, we declared the picture locked. It was an exciting threshold to cross. Surprisingly easy to cross too. There was a certain level of second guessing, but we were ready to walk away. I don't know if it was George Lucas who said it first, but it was he who I first heard say it, that films aren't so much completed as abandoned. There is no doubt that we could have continued to tinker. But we were out of specific adjustments to make and all we really could do was re-visit sections of the film that we thought we could improve if we looked hard enough. No doubt that that would be a process fraught with losses to the law of diminishing returns.

....I've already skipped a step! Before we locked Mike and I spent an evening getting a handful (five) inserts, two of which we used Bronwen for. We popped four of those five into the edit before we called it quits. The fifth we tested and while it worked on paper, it simply didn't flow right in the cut once we tried it out. I learned years ago that sometimes moving forward means going backwards to what was right in the first place. In my days in theatre we often found that we had to try something new in order to realise that we had the right answer in the first place.

A few days after lock we had a spotting session with Bill for sound. It was quite promising. He felt that the majority of the audio was useable. We had talked ourselves into a worst case scenario where we were certain that more than 75% of the audio was useless. But we'll trust the Geminii winner on this one. Even a number of scenes we had assumed as we were filming (mostly stuff on the lake) that we were simply recording guide tracks for Bill assuaged us were 'no problem' and he laid out for us exactly how he would salvage them. I credit both Bill for his post-production expertise for this as well as Luke for going the distance on set to get good production sound.

A day and a half later we received a troubling email from Mike (and this is where I began to get upset with myself for not documenting each set along the way). His hard-drive array had suffered a failure. We may have lost data, but we wouldn't know until the array was operating again. The worst case scenario was that we would have to reload a bunch of files from back-ups, so it was not a disaster – merely a delay. Nonetheless it was not a pleasant 36 hours waiting for word from Mike, but eventually it came... no loss except for the day and a half of worry. Yay!

Even so, that day and a half would skew our post production schedule by more than that amount of time.

We contacted the festival with our first submission deadline – the Toronto International Film Festival – and determined that we could still get our work in progress to them in sufficient time for their purposes.

It has been a long process and we are not out of the woods yet, but having passed a significant benchmark – picture-lock – and knowing that there is a real light at the end of the proverbial tunnel at last it has been a pleasure to let the incidental folk involved that we will be doing a cast & crew screening before mid-summer when I've has occasion to tell them.

Okay, I admit that I made a point of calling Keith's parents and telling them specifically that the end is in sight.

This is great; the movie is getting closer to being done!

Pretty excited to get to see this movie when it does come out!

And maybe you can put the comic character's scramble to get on the boat in a deleted scenes on any DVD release! (Grins, I know fans would love it!)