Congratulations are in Order...

I have been remiss.
The Beast... DVD release party at Denman Place Cinema has come and gone and I have been too distracted to comment upon what is now behind us.

By all accounts it was a great night.  Over two hundred people showed up - the biggest single location audience for the movie ever.  While it made for an only half full theatre, it made for a very full lobby - and considering the heat of the evening, that was as much as anyone would have fairly desired.

We ended up adding one late-addition short film to our roster for the evening on short notice.  20 Minutes of Oxygen a music video by The Darkest of the Hillside Thickets - a Vancouver band that has a song in Beast.... 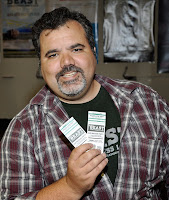 20 Minutes of Oxygen was directed by the editor of Beast..., Mike Jackson. Mike also edited and did the effects on the video and it was shot by our Director of Photography Naim Sutherland. 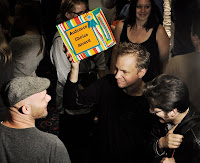 Following the screening of the shorts, we took an intermission where everyone was treated to a great set by The Pucks, who have two songs in the film.  (they played both in their set.)  Lots of excitement in the room through intermission.  The short films were extremely well recieved and it almost seemed as though the response from the audience got better with every film... which I am somewhat hesitant to admit, as a short film I wrote and am featured in was the second one shown of six.  The buzz in the lobby about the films was great as everyone clamoured to get their vote for the audience choice award into the
box. 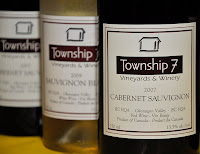 The Pucks rocked out - and how can you not rock out with a tuba?  People enjoyed the wine (and audience choice award) sponsor's product - Township 7 wines as well as the beer alternative (who didn't sponsor us so it wouldn't be fair or right to name them).  A French documentary crew doing a film about independent film in Canada showed up (they were following Beast... cast member Fabrice Grover) and shot the event and interviewed me. 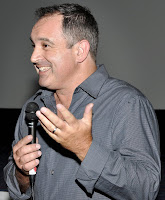 Once all the halftime hoopla was over, everyone returned to the cinema for the main attraction.  Craig, I am told, said all kinds of nice things before the film started - I wasn't in the theatre at the time (there was SO much to be done).

The film, as always, spoke for itself.  Everyone enjoyed themselves.  Many people walked away surprised by the quality of both the production and the depth of the plot.  We sold a lot of DVDs.

Once the main feature was over we drew for the 50/50 draw (I must admit I'm not sold on 50/50 draws... I don't win even close to half the time.) and other door prizes and then announced the winner of the Township 7 Audience Choice Award.  And here is where congratulations are in order.  The winning short was Death Wish, directed by Chad Costen.  I didn't think it was appropriate for me to vote, but if I did it would have been for Death Wish.  (The film I was involved in wasn't eligible... because I was involved.)  I had picked it as a favourite as it had been chosen as part of the shorts program at the Missisauga Independent Film Festival for this year.  MIFF was where Beast... won it's first festival award on it's festival circuit pilgrimage last year.

MIFF is finished now for this year.  I am sad to say that Death Wish didn't win it's category.  However, the feature that caught my eye when I looked at what was being screened this year, Feature Presentation (yes, that is the film's name) ended up taking the mantle from us as the Best Feature.  Congratulations to them.  Wear it well.  I hope I get a chance to see it somewhere someday.