It has been a while since there has been much news about the Beast... and while it is not "over" per se, the news will be stretched out over longer periods now.

But meantimem many people associated with the Beast are moving on to other things.

I'd like to take a moment to draw your attention to one I find particularly interesting and worthy....


C.S. John, one of Beast's producers is developing a documentary exploring the many facets of the fertility industry.  There are a staggering number of couples in the world who for one reason or another will deal with fertility problems to a greater or lesser degree.  It is a heart-breaking thing to witness.  It is so emotionally wrought that many people won't even make their problems public, but it is so common that I can pretty much guarantee that you know someone who has faced this issue even if you don't know who they are. 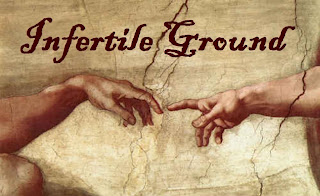 The film's title is On Infertile Ground and part of its intended purpose is to bring to light the realities faced by these couples so as to destigmatize the issue through increased compassionate awareness.  It may also help people facing the anguish of infertility to find both strength in unity and to open the doors to therapies they may not have otherwise considered.  It is virtually guaranteed to be a film that is simultaneously tragic and uplifting.  I heartily encourage you to check out the details at the website linked above and join their group on Facebook and then to go and make a donation (no amount is too small) to their IndieGoGo account.
Date Posted: 2/11/2012