Craig was there for the opening gala, walking the red carpet. 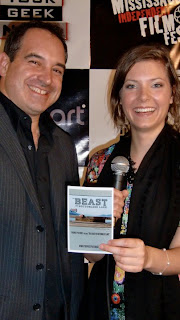 I will be talking at Cafe Skeptique about the film, cryptozoology and the Ogopogo at 2pm at The Bean. (388 College St. in Toronto.)

[On a related note, there is a slight irony hidden in all of this.  For months I've been bemoaning the fact that I couldn't attend TAM8 this year.  Last year I went to TAM7 and did a test screening of the film.  But just last week - a week ago today in fact - I returned from a trip to Europe to a wedding where I was best man.  It was simply going to be too much money and too little time or me to do both the trip to Europe and to Vegas for TAM.  But then we were selected for MIFF - on short notice I might add, just before we left for Europe.  I stuck to my guns.  MIFF was the same weekend as TAM and would cost a comparable amount... not to mention that in the time since we committed to going to London for the wedding, my girlfiend and I found out we are expecting a baby.  Jodie, my girlfriend called me an idiot (about not going to MIFF, not the baby) and booked me a ticket to Ontario.  So, now I'm going away on that weekend anyhow - AND I am participating (however briefly) a critical thinking event, all in service of the film.  I hope folk are having a great time at TAM8, I plan to have a wild rumpus at MIFF.]

Then I'm high-tailing it out to Missisauga to the theatre for the (ulp!) World Premiere.

I keep getting asked if I'm nervous.  The short answer is 'no.'

The long answer is - I suspect I will be, though honestly I feel pretty confident about the film by this point.  I guess there is a fine lin between nrvous ad excited.
Date Posted: 7/08/2010