Today has been so exhiliratingly weird.  Many people I know have posted things about "Beast" winning Best Feature at MIFF last night.  Last night for a few hours before going to sleep and then again this morning after the West Coast began waking up I could have refreshed my Facebook account every minute and there would be either a new post, new comment or new announcement of someone "liking" one of the already existing posts.

Honest to god, this afternoon when I opened the "top news" that the site generates for me based on the most popular recent threads of all my friends, HALF of them above the fold (and several more below) were related to "Beast."  Such a great feeling of validation.

Yesterday before the final film of the Mississauga Film Festival Craig and I went and met two old friends (one of his, one of mine) and watched the World Cup.

When the game was over I remarked as the camera showed the jubilation on the face of Iker Casillias, the Spainish goalkeeper, "what a crazy moment - you are living the single greatest moment of your life and you have to know that the chances of there being a higher high is close to none."  But you have to admit that having the specter of your remaining life being that you will never do better than achieveing the single biggest honour that you can in your profession, the "it's all downhill from here" isn't really such a bad thing - there's an awful lot of high topography to step down to below you and hey... you won the fucking World Cup - FOREVER!

When I was in my early and mid 20s I spent six years touring Canada in a comedy troupe, the Juanabees (to whom there is a tip of the hat in the movie).  Those were seminal years of my life.  We had a great time.  We learned a lot.  We met some very cool people, some who went on to various levels of fame and fortune and others who are still good friends and collaborators today.  (Indeed at least one falls into both of those categories - and has a cameo in "Beast.")
We picked up some accolades - it actually mentions in my company Bio for Provost Pictures that the Edmonton Journal called us Canada's best comedy troupe without a TV show.  (This was in the heady days of Kids in the Hall and the earliest iteration of This Hour Has 22 Minutes.)  I've had a few people tell me that the Juanabees were inspiring to them - sadly no one who has gone on to being a superstar of comedy.
In any case, those were some pretty cool times for me.

I haven't wallowed in that, but it has always kind of been there - as I expect it would be in anyone's life, this just happens to be my personal version of measuring my self-validation.

I have never assumed that I would never do better and there are numerous things that I have done since then that I could probably make arguments in favour of being new high-water-marks in my life.  But none have been definitive.

As "Beast..." has come closer and closer to completion I have been pleased with the way it has been turning out and it has seemed to me that this might just be the clear new pinnacle.  Now that we've screened at our first festival and won Best Feature I'm actually thinking that it is a fait accompli.  All that really remains is the fourth Everest* - making sure as many people see it as possible: Distribution.

And the cycle begins again.  In order to out do myself next time I'm going to have to work even harder - damn!  But first, we have to ride this one out... I'm really looking forward to the Okanagan Festival.  Returning to the scene of the crime. 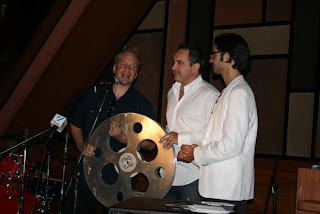 "This one is for Keith."
*I could have sworn I had done a post on this phrase already, but damned if I can find it.  I don't know where I got it from.  I may have made it up myself.  And David Nykl cited it in one of our YouTube videos of him.  What I was refering to was the notion that making a film is like climbing Everest four times.  Once for pre-production, once filming, once in post-production and then one last time in promotion and distribution.
Date Posted: 7/12/2010