Mississauga Missives from the Front

I wouldn't believe this if it didn't happen to me - so I don't expect anyone else to believe this.

I got carded!  I am back in my hotel room, rather than partying after the premiere because I GOT CARDED!  This is not a boast.  I do not look like someone who should be denied entry into a bar for being under age. 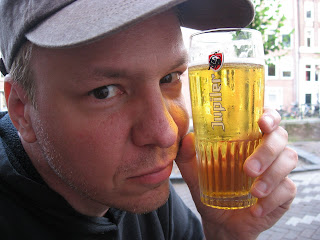 As if to accentuate the point I have a frikkin' beer in my hand!
Not one week ago I thought to myself "there's something that will never happen to me again" - BZZZZtttT! - wrong.

Just some doorman deciding that everyone had to have valid ID I guess - regardless of how clearly over legal drinking age they might be.  Prick.

Oh well.  It's not really the end of the world.  In the past 36 or so hours I have managed to sleep three times.  Sadly its not a matter of quantity.  And the quality and the duration have been terrible.  I even walked out of the second film tonight because I was concerned about snoring in it - which would have happened if I was watching Jurassic Park or Aliens too so should not be taken as a measure of the film's quality.  I was not being rude by leaving.  I was leaving to avoid being rude.  Warm, dark space with less than 3 hours sleep in the past day and a half... it's a miracle I didn't fall asleep during my own film!

So Beast screened to it's first impartial audience tonight....

The Mississauga Independent Film Festival is small and friendly.  There is only one theatre and it may hold 250 people at most.  I'd say we had a 1/3 audience - which appears to be par for the course.

I would have to say that if we can get the reaction we got from this audience from every small audience we can be proud of what we've done.  They laughed as much as could be expected, and consistently throughout.  You could hear people "getting" the tricks in the movie at the points where they needed to be "got."

I don't think I've mentioned this anywhere else before, but at the cast and crew screening, Mike, Craig and I (Mike mentioned it first to give credit where credit is due) noted that there was one scene that due to some additional cuts could now be lifted out wholesale without harming anything else.  Tonight we screened the version without that scene - possibly the last cut we'll ever make.  I didn't miss it at all, and it helps speed things along more in the last quarter of the film.  Yay!

Anyhow... not meaning to dis the MIFF, but I expect a much better turn out in the Okanagan in ten days.  And so it should be.  The Okanagan is at heart the REAL premiere of the film.

I was at the 7 oclock show, I thought the movie was and will be my fav. movie of the summer.
Miff is still not a big as I would like to see it, but it is growing.
Your movie was fantastic to say the least, we laughed quite a bit.
I think my fav line was "Does a bears toilet paper hop?
I laughed so hard!
I will do my part to get more people to come out, spreading the word!!
I also posted the trailer on my blog...
The speech about Keith made me tear up, I am 6ft3 235 pounds of emotion at times.
Rest his soul, and I wish you guys all the best with your company Provost Pictures and the movies you make!!

I love that line too... It funny, but it makes people work - draw on all their knowledge of pop-culture.

It's probably obvious in the film - I don't think things should come easy and if they don't they are far more gratifying.