Perhaps you know that the Vancouver International Film Festival is on.  We've fielded a number of questions asking about whether we are in the festival or when exactly during the festival that we are screening.

The answer is; we aren't.  But if you were judging by the media, you would easily assume otherwise.

I can honestly say that I don't believe ANY film in VIFF has had as much media as The Beast of Bottomless Lake has had in the period of time leading immediately up to, and during the festival.  Naturally I wear that as a sly badge of honour.

Just for fun (and gloating rights) I'm going to repost them all here in one place (including a few new ones).

I'm going to somewhat arbitrarily draw the line at two weeks from the start of VIFF - it seems to me to be a pretty reasonable period in advance of the event for the earliest preview media.

The first one is from the SciFi & TvTalk blog: Stargate Atlantis' David Nykl Checks In


One week later - one week before VIFF started, and a week and a half before VCON we got two hits in one day...
Glen Schaefer, the Vancouver Province Film Critic mentioned us being at VCON. 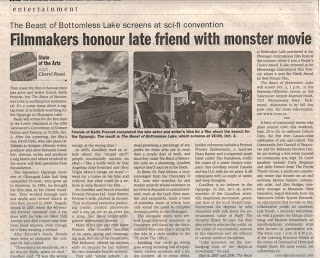 That same day Cheryl Rossi from the Vancouver Courier Movie Guide did one of the freshest articles on the film yet.  She totally did her homework and found a number of details that weren't spoon-fed in our press-release.
As VCON began we started geting TV hits.  First up Deborah Goble interviewed Craig and David on CBC News.  This one is perhaps the most amusing, as they strongly imply that "The Beast..." is screening at VIFF.  But they don't OUTRIGHT say so - which is probably fortunate, but I'm not going to complain if someone mistakenly assumes we were screening there... it's not like WE said we were! 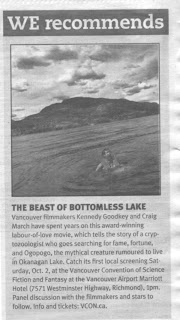 Also just before VCON the WestEnder ran a small piece and a photo about the film being screened at the convention.
While we were at VCON Johanna Ward from The Express on Shaw TV was doing a piece on VCON and she grabbed David Nykl for a few words.

Immediately following VCON David spent some time chatting with the guys at SciFi Diner about the film (and of course a bunch of Stargate Atlantis and other David Nykl appearances).


Powered by Podbean.com
But WAIT! There is more!

On Tuesday of this past week we were featured on Film Stew - a blog from LA that focusses specifically on what is hot in the independent film world. Richard Horgan, who runs the blog made this a pretty darned good article covering a lot of ground from the film's inception to the content itself.

On the same day... okay this one is a bit of a cheat as it's Letters from Pegasus, David's Fan Blog.
Lastly - two blog reviews...

After our screening at VCON we were asked if we'd like to do a second screening in the video room on the Sunday afternoon.  The video room as it turns out has a rather small and transient attendance - like about eight people at a time.  I wasn't in attendance, but Craig was there to do an introduction.  The film started at a little past two.  At 3:44 my standing search for tweets about the film produced this derisive gem.  You can't please everybody.  Later my Google Alerts sent me this link.  Same guy - quite obviously.  And it becomes a little more apparent (from the context of the blog and the time stamp on the tweet) that this guy showed up in the middle of the film watched a little bit and walked out.  Bravo.  I amke no apologies for not making a film that is appealing to someone walking in after missing an hour or more of set-up.  Some people just have to be haters for hating's sake.

The second one is quite insightful.  It is from Victor Schwartzman who ran the video room - and over many years of running video rooms has seen an awful lot of stuff.  He picked up on a number of things in the film that most people miss on the first viewing.  This guy is a veteran film-viewer with some real chops for dissecting the aspects of a movie.  This is a really great review.

And believe it or not.... we aren't really done with this cycle!

While at VCON we were asked to do an interview for a notable sci-fi news collective (yeah I am witholding the specifics at the moment).  The interview itself was supposed to happen today, but had to be put off for a variety of reasons - not the least of which is today is Canadian Thanksgiving.  Anyhow... enjoy your turkey, look for more news from the whole VCON experience next week... and if you have a chance, go out and see some of those neglected VIFF films too before the festival ends.
Date Posted: 10/11/2010

Great News! Really hope you guys can get a big distribution deal!

I can't wait to get to see this movie again!